Michael Bielicky was born in Prague in 1954. He moved to Germany in 1969. After working as a photographer in the USA, he studied (1984-88) at the Kunstakademie Düsseldorf, from 1987 as a student of Nam June Paik in his master class, whom he then served as an assistant until 1989. In 1988 he received a study grant from the Cité Internationale des Arts, Paris. In 1991 he became one of the founding teaching staff in the department of New Media at the Akademie vytvarnych umení, Prague. Bielicky lives in Prague and Düsseldorf.

Following his photographic work of the early 1980s, Bielicky first turned to video in 1984. One of his latest and more well-known works in this medium is Vilém Flusser’s Flow (Vilém Flussers Fluss) (1991-94). In the late 1980s, Bielicky developed a form of video sculpture with clear, linear structures. These have incorporated increasingly smaller monitors attached to curved rods so as to establish coordinates of energy in space . Since the mid-1990s Bielicky has pursued a number of projects related to de-materialized coordinates of energy: he uses satellite-controlled Global Positioning System technology to create interactive installations, in which his own movements serve as a representation of the movement of various categories of information through space and time. In his work, Bielicky gives form to the flow of information, at the same time drawing on traditional, often Jewish symbols. Affirming the enduring validity of these, he uses them as metaphors for contemporary experiences in the virtual information networks. 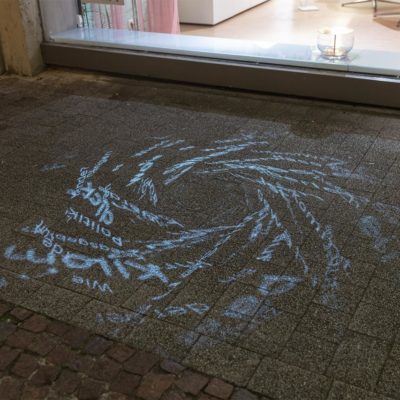