Today, moving images undergo countless democratic production processes. Thanks to digital technology, other media such as film and video have opened up to many different art genres and are no longer the sole preserve of a film production elite.

This has enabled hybrid media forms and highly interdisciplinary work. Filmboard Karlsruhe works with film in its many different forms; acts as a networker, connecting the various moving image producers in Karlsruhe; promotes and advises on film projects with a cultural and artistic focus; and provides a platform for presentation and exchange for film producers and their audience through a range of film events.

Moreover, a new focus is on “green”, or sustainable, film and media productions. In that context, several “green consultants”, certified by MFG Medien- und Filmgesellschaft Baden-Württemberg, are now serving as contact persons in this area, working in the new Green Office that opened in the Alter Schlachthof creative cluster at the end of 2018. 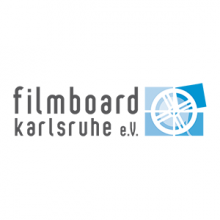